The aim of DRAGONS is to explore the formation end evolution the first galaxies and, in particular, their role in the reionisation of Universe. To do this we have developed a new semi-analytic galaxy formation model, Meraxes, which is tightly coupled with a semi-numerical scheme in order to describe the growth and structure of ionised regions. I am the author and lead developer of Meraxes.

The "simplest" model of galaxy formation 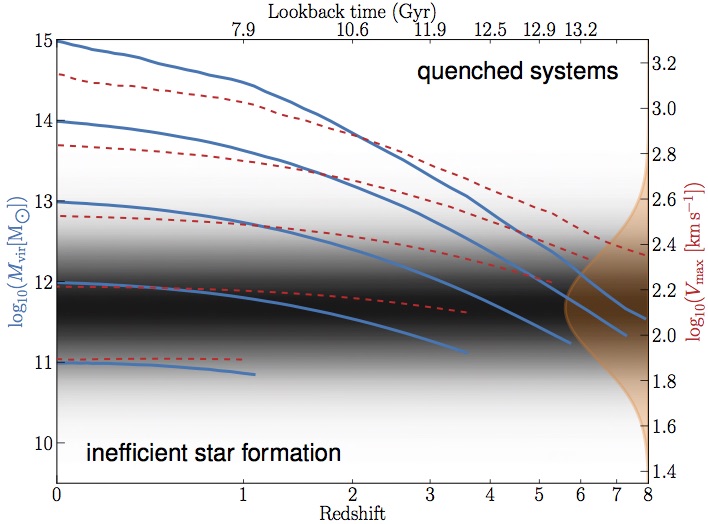 In this work we introduce a new, simple model that self-consistently connects the growth of galaxies to the formation history of their host dark matter haloes. This "formation history" model is built using just two simple, phenomenologically motivated equations that depend only on dark matter halo properties. The first describes the rate at which dark matter haloes are fed with fresh baryonic fuel for star formation, whilst the second equation describes the efficiency with which this fuel can be converted into stars. Despite its simplicity, our formation history model is capable of reproducing the observed z=0 red and blue stellar mass functions and can easily be extended to arbitrary levels of complexity to match multiple observations across cosmic time. 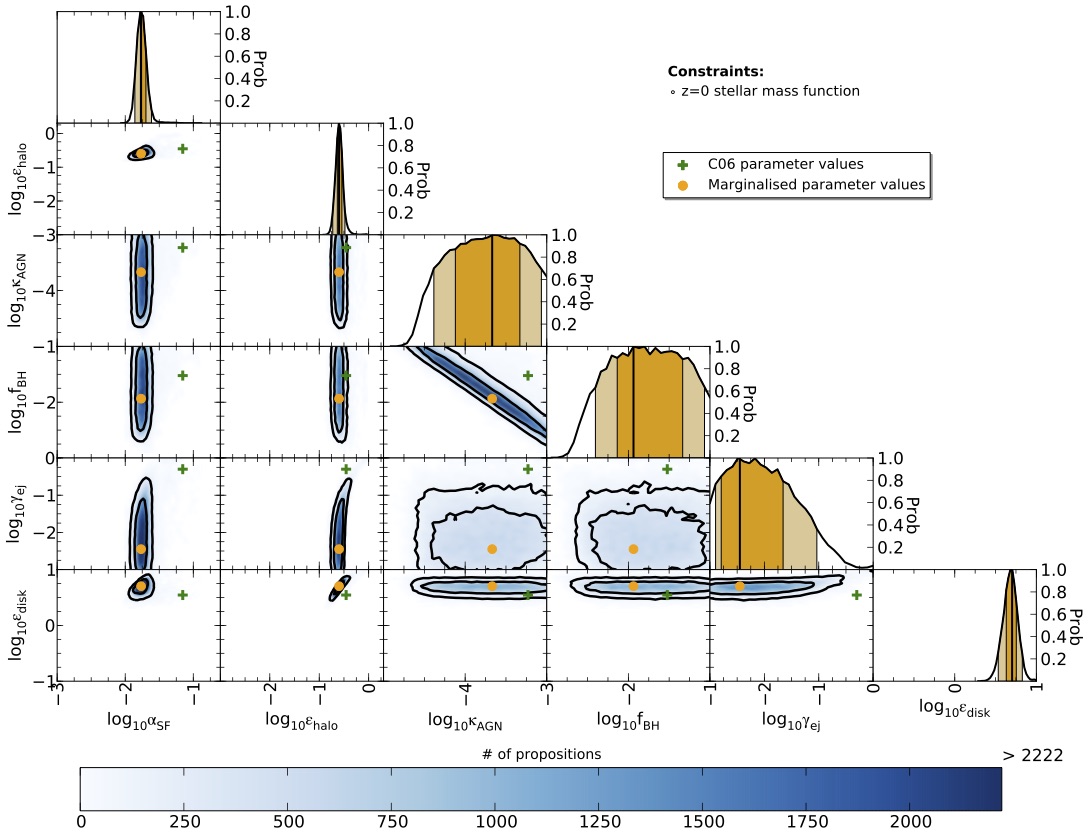 Semi-analytic galaxy formation models are a commonly used tool in modern astronomy and are particularly well suited to helping us understand the statistical properties of large galaxy samples. Typically these models are "hand tuned" to reproduce fundamental observational relations in the local Universe, with inferences then being made about higher redshifts. However, using Monte-Carlo Markov Chain techniques, we present the first robust statistical calibration of a popular semi-analytic model against observations at multiple redshifts simultaneously. In order for the model to be successful, we find that we are required to push a subset of the implemented physical prescriptions to extreme limits. This suggests that our model may be incomplete, possibly requiring the addition of a mechanism to preferentially bolster star formation in the most massive halos at high redshift.

The midlife crisis of the Milky Way and M31 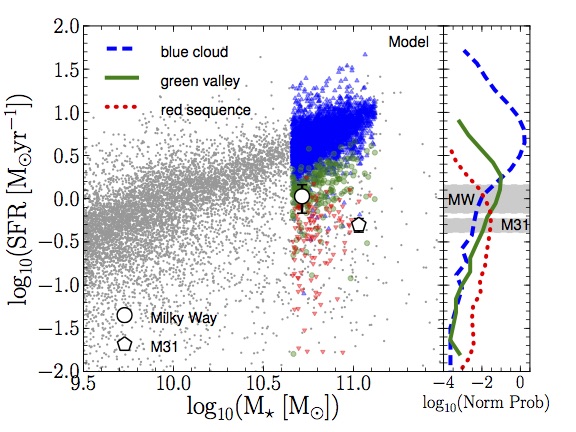 Both the galaxy in which we live, the Milky Way, and our nearest neighbour, Andromeda (a.k.a. M31), are commonly thought to be "typical" spiral galaxies. Using a combination of the best available observations and a state of the art semi-analytic galaxy formation model, we investigate just how typical these galaxies really are in terms of their masses, colours and star formation rates.

The result: Both galaxies may be undergoing a "mid-life crisis"... 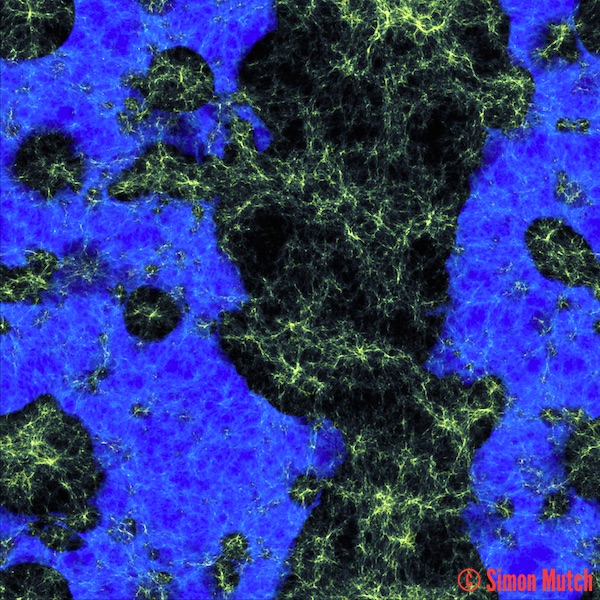 This work introduces Meraxes, a new semi-analytic galaxy formation created as part of the Dark-ages Reionisation And Galaxy Observables from Numerical Simulations (DRAGONS) programme. Meraxes has been specially designed for investigating galaxy evolution during the Epoch of Reionisation. It incorporates a consistent coupling between galaxies and a spatially and temporaly varying UV ionising background. This unique tool can be used to model the constraining power of future 21cm radio observations on high-redshift galaxy formation as well as to test the effects of different physical processes on the progression of reionisation. 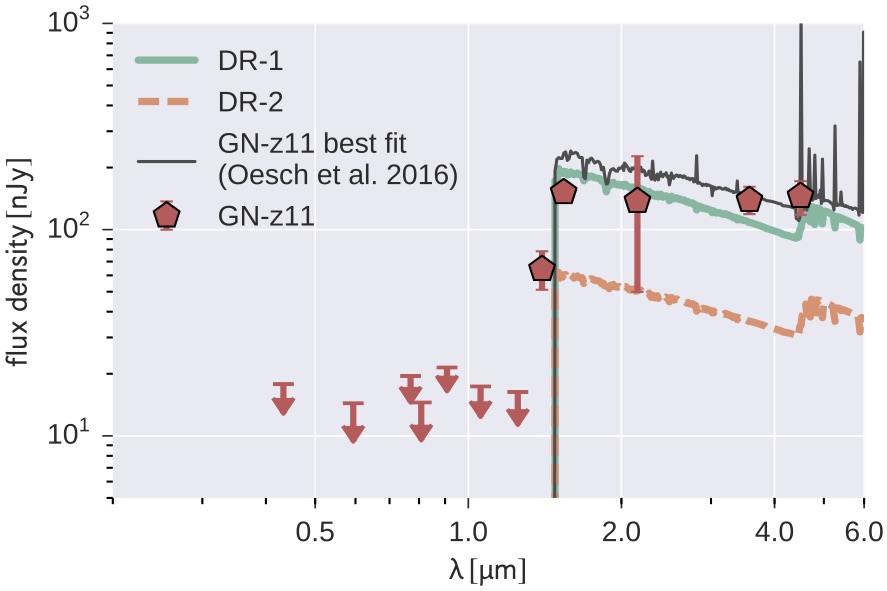 Using Hubble data, including new grism spectra, Oesch et al. (2016) recently identified GN-z11, a MUV=-21.1 galaxy at z=11.1 (just 400 Myr after the Big Bang). With an estimated stellar mass of ∼109 M⊙, this galaxy is surprisingly bright and massive, raising questions as to how such an extreme object could form so early in the Universe. Using Meraxes, a semi-analytic galaxy formation model developed as part of the Dark-ages Reionization And Galaxy-formation Observables from Numerical Simulations (DRAGONS) programme, we investigate the potential formation mechanisms and eventual fate of GN-z11.

Find out more
All publications